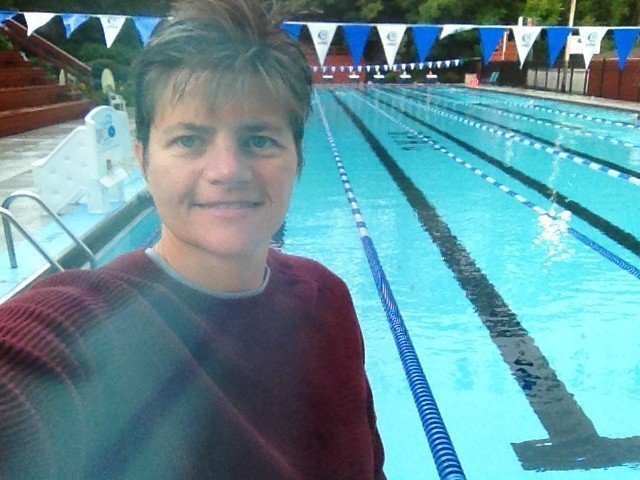 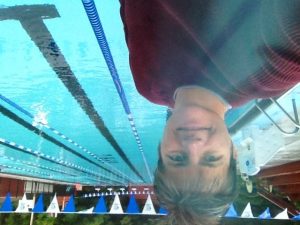 I was always a math geek, which comes in handy in endurance coaching.  Way back in 2007 or 2008 I took a clinic from Dr. Phil Skiba on periodization. The clinic covered topics such as the dose-response curve in endurance training, collective fatigue over time, shedding fatigue, and the rate of fitness loss vs. fatigue decay. The clinic was one of the first times I can recall that the formal idea of a “time-distance” relationship in endurance sports was brought up in the context of how to coach athletes and interpret their abilities.

I started experimenting with using this assessment in my own swimming & my athletes.  Several years later I began combining this idea with what I had been practicing when I was a Total Immersion coach.  I tried combining ideas that were well studied in traditional sports science literature with what I’d had learned from Terry Laughlin regarding stroke length and rate.  I felt that I developed much better coaching agility as a result.

Shortly after experimenting with these ideas…in fact the very first day I used it in a  group of triathlete swimmers, many of my swimmers set PRs for 50 & 100m swims just by refining and defining their control over their stroke.  How did they do it? The short version is that I had them perform a simple fatigue decay test by doing test swims of either 50 & 300 yards (>2:00/100yd swimmers) or 100 & 400 yards (faster than 2:00/100yd swimmers).

I used some simple algebra to determine the rate of decay, or how quickly they tire with distance.   Swimmers who fatigue more than expected for the 300 or 400 yd swim are typically strength dominant, and able to power through shorter distances with what appears like speed, but is really just strength masking marginal skills.

On the other hand, swimmers who had trouble swimming more quickly at the shorter distance, are typically endurance dominant, and able to swim for long durations but at a slow rate of speed.  They may have good skills, but are afraid to exert more effort, or have learned that when they try to swim faster they tire too quickly.

By identifying each swimmer’s strength I was able to give them a target practice set that took about 10 minutes to complete.  Their goal was to swim each set of 50s at the same pace with an effort equal to a predicted mile pace.  How did I predict the pace?  With the magic formula of course.

In 2012 I shared some of my thoughts on the total immersion website, where many thoughtful and provocative discussions took place. I have often gone back to that thread to review what I wrote at the time as well as revisit the thoughts of another coach, Charles Couturier of Montreal, Canada. Charles is an outstanding coach at the University of Montreal and runs a large tri training program for people of all abilities.

Here is the largely unedited text of what I shared that day in response to using CSS to train speed and pace. CSS is a concept that dates back to at least 1965 when a distance-time model was proposed by Monod and Scherrer as they evaluated world records in swimming, running, speed skating and cycling.

Since that time many sports scientists have examined and used the model to try and define specific stroke rates and stroke lengths in swimming, resulting paces, power targets for cycling and running paces. Swim coaches began using “Critical Swim Speed” as measured by using either a 400m & 50m swim test or a 400m & 200m swim test. The choice of distances affects the resulting slope & intercept (speed and anaerobic work capacity) as calculated by the model.

In theory, the shorter test, which taps into anaerobic energy stores, helps to “strip out” the anaerobic contribution from the longer test. The resulting pace represents an aerobic swimming speed that can be sustained for long durations by trained swimmers.

I use the CSS concept to establish initial goals along with tempo & SPL targets for my masters’ swimmers who are new to pacing or have not trained with me long enough to have a feel of their targets or points of improvement.

About once a quarter I’ll have my swimmers do the following:

The critical swim speed plots the time vs. the distance of each of the two swims. A line drawn between the two is described by the basic algebraic equation:
y = mx + b

by plotting a “long” and a “short” time trial test, the anaerobic and aerobic capacities for each effort are normalized. The above equation to determine the slope removes the anaerobic component from the longer time trial (whether it is 300, 400 or 500yd or longer TT).

Why is the critical speed slower than the 400-yard time trial speed?

In an activity lasting 8 minutes, even 20-30 minutes or more, a component of the speed comes from anaerobic muscle activity…brute force.

The comparison between the long time trial where the aerobic system makes a significant contribution and the SHORT time trial which is primarily anaerobic, allows you to subtract the brute force component out of the longer time trial speed.

This leaves us with what should, in theory, be completely aerobic training.

In the Steel City Endurance approach to swimming, this is vital because the intensity level is low enough to allow us to focus on technique improvements while swimming at a pace that isn’t “too slow” by anyone’s standards as long as the CSS was calculated from two recent time trials.

We are left with what in theory, represents the highest aerobic speed a swimmer can swim, meaning that at this pace and anything slower we should be able to more easily implement technique changes and adjustments.

Just as you would practice a new or challenging passage of a piano piece or any other musical instrument slowly enough to allow you to learn proper timing & finger placement, an aerobic pace in swimming allows you to learn and imprint new and better neuromuscular pathways to make your swimming faster and more streamlined.

Here is where the Gear Changing differential comes in….

At Steel City Endurance and Fresh Freestyle, we focus on the neuro-muscular connections and movement pathways from brain to muscle. We can swim at the critical speed in many different “gears”, but we want to find the optimal gear, or stroke length and rate, that will allow the swimmer to work in a comfortable capacity while leaving ample room to grow in speed and get faster.

Once I’ve calculated the speed with a spreadsheet I’ve set up to do that, I”ll give my swimmers a test set of 10×50 at critical speed + 5 seconds rest. Again I have this already set up in a spreadsheet so the set is ready to hand to them when they finish the test and I put the numbers into a calculator on my ipad.

While they are swimming their 10×50 they count their average SPL. For some this the first time they have ever done that, but it’s in the context of a familiar type of training…a time trial followed by sets at a prescribed pace. This helps people understand that counting strokes is not the same thing as aiming for lowest stroke count…we are just collecting information at this point.

With this second set of data points, average stroke count per 50 at their CSS pace, they are now honing in on a really valuable set of training parameters…not JUST critical speed, which can be swum at many tempos and stroke lengths (ie many different stroke techniques or GEARS) , but they are establishing a typical stroke length for their current fitness and skill level. This creates both a current measurement of stroke length AND  a target metric that can be improved.

After the 10×50 counting strokes, their next set (on a subsequent day perhaps), will be to use that SPL and the critical swim speed, and swim the long set again, but with focus on holding SPL at that average number and not exceeding it.

What we’ve done is used the swimmers current fitness & ability to give them a starting point, without placing any specific focus on the swimmer adhering to SPL or tempo constraints while swimming the initial time trial. This allows anyone to do the set, not just people who are math inclined.

I can take any of my swimmers with any level of experience, have them do the assessment set, plug their times in and my spreadsheet does the calculations, recommends the 10×50 pacing and the swimmer then begins their journey!