We had a fantastic turnout of 18 students, nearly all of them triathletes with varied levels of experience and goals.   The clinic started out with a brief introduction to the importance of improving efficiency in swimming as the first step to improving endurnace, enjoyment and speed.

Terry demonstrated several basic drills and skills that we would be practicing as a group, and then we hit the water.  With 18 students, we first divided them 9 per lane and had each student proceed across the shallow teaching lane in superman glide focusing on two primary focal points, first a relaxed, supported head and second relaxed arms on a wide track.  Terry & I each made manual adjustments for each swimmer then sent them on their way.  After a few adjustments, the group was able to spread out and practice Superman glide to swim…first feeling the relaxation of head position and taking that into swimming, and on alternate lengths, feeling the wide relaxed arm position.

While practicing Superman Glide to swim, focusing on the thought of “replacing” each arm where it came from helped to significantly improve and even eliminate cross-over for several swimmers.   A very simple focal point that’s effective.  Some students expressed difficulty moving from the flat superman glide position to initiating stroking.  For these students I emphaszed tthey  beging swimming with a reach forward of the leading arm, which allowed body rotation…then begin stroking.  Most students were able to calm and quiet the legs to improve streamlining as well, even though this wasn’t a primary focal point of our swimming.

The first 45 minutes or so were dedicated to alternating glide & swim across the lane with just a few variations of focal points.   Then we spent the next 45 minutes learning and working on recovery focal points.   First Terry demonstrated small elbow circles out to the side of the body, swimming with contrasting techniques…first showing elbows recovering behind the spine, upsetting balance, then elbows wide of the body line, restoring balance.

Students practiced standing rehearsals, as show in the photo above, and then rehearsed this feeling while swimming.  4 lengths of rehears with Terry & I each in a lane making small nudges to various elbows pointing in awkward directions.   I think most students at this point experienced a definate shortining of their strokes due to the focus on a small elbow recovery circle.   This led us nicely into focus number two for recovery, which was elongated ovals with the elbow. Terry demonstrated holding a long extended body line on one side, while allowing the recovering elbow to sneak forward bit by bit.  For students who have either hardwired in a poor, unbalacned recovery or students with stiff tight shoulders, this took a little bit of practice with some hands on assistance to find the range of movement.  Without question, everyone had a greater range of movement than they had thought, witout experiencing any shoulder discomfort simply by allowing the body to remain rotated wiht one arm extended, and letting the recovering arm move from a mobile shoulder blade sliding and protracting along the ribcage…not just trying to find motion from the shoulder joint itself.  When properly done, this recovery motion should not create any discomfort at all in the joint.

Once again, several lenghts of practice with this new recovery focus allowed students to start feeling for themselves what was being demoonstrated.  A few more focal points including knuckle dragging and ear hops tied in the entire recovery process in a way that allowed restoration of lateral balance and elmination of over-rotation, not to mention improved and healthier range of motion for the shoulder. 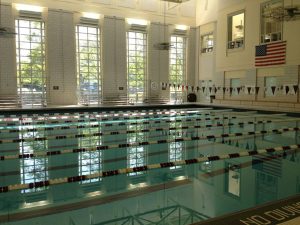 A variety of new focal points and focused concentration on swimming highlighted the importance of slowing down the movement and teh stroke in order to allow the attention to be directed to changing movements.   Turning cognitive skills into motor skills.  It’s so important when wanting to change or improve technique that swimmers shift out of the “workout” mode and into the “learning” mode.  While that may sound quite obvious, many people try to integrate new skills during a routine “workout” or while making sure they are “getting the yards in” that are called for in their swim plans.   While it’s possible to make improvements this way, the majority of repettions remain being performed with the swimmers old strokes and previous habits, with a smaller number of strokes integrating the new thoughts.  They “get the yards in” but at an opportunity cost of significantly and permanently improving their form.  There is a time and a place for everything, and when making major or minor form improvements in any sport, it’s vital to allow the motor movements to slow down, create an environment of focused attention and progress from slower deliberate movement to more flowing deliberate movement until that pattern has fully replaced the old habit.

The Saturday day morning Effortless Endurance taster was overall a great opportunity for 18 swimmers to start imprinting major improvements to their stroke and learn some new practice habits, which will ultimately lead to both improved endurance and speed.

If you are interested in a TI “Taster” clinic or the full 4 week “Effortless Endurance” class, feel free to contact me or look for the upcoming events here on my website.