Due to a large number of questions from my athletes who are aging up into their 50s or older, I am undertaking a series called “Tri over Fifty”. Each article will discuss a different aspect of participating in our wonderful sport for those fifty years of age and older.

Is it safe for athletes over fifty to train for triathlons?

The answer is almost certainly a resounding “Yes”. However, let’s discuss some of the benefits and risks of this type of training. The benefits of physical activity in aging are well demonstrated and include improved cardiovascular, pulmonary and muscular systems, as well as improved brain function.?1? While aerobic fitness doesn’t improve cognitive ability in people without any difficulties, there is a definite relationship between those with regular, habitual physical activity such as masters athletes.?2? But along with the benefits of regular physical activity come risks, such as injuries from either overtraining, acute trauma and cardiovascular events. ?3?

Why 50? Well, to start with, I just joined this decade of life, so I can identify with the many challenges that come with it. Some are common to younger decades as well such as family commitments, caring for kids who may still live at home and being in prime earning years of your job. However, others have more in common with the decades to come, such as problems with arthritis, menopause, andropause, development/arrival of chronic health problems such as heart disease or cancer. Fifty marks a point in our lives when we may no longer feel youthful, but we are far from old age.

The most recent question I received was from a 54-year-old athlete, Dan B., who asked: “How can I remain injury-free at 54 years old while training for triathlons?” Without knowing more about Dan’s specific background, I am going to make some assumptions for this series.

In this article, I want to discuss the most important of these three first…issues related to the heart.

Is Triathlon Training Healthy for the Heart?

Exercise and regular activity are some of the best prescriptions a physician could write for her patients! In this modern world of a pill for every problem, you’d need a dozen or more different pills to even come close to the benefits of exercise, and it still wouldn’t be close. People who are routinely active have up to 50% fewer cardiac events in middle life than their sedentary comparisons. ?4?

Some additional benefits include decreased depression and anxiety, lowered risk of dementia, stronger bones, fewer falls, lowered blood pressure, better lipid profile, fewer strokes, lowered risk of multiple types of cancer and more. Feel free to download the infographic here and share, or print it out and use it as a reminder of why you should exercise.

The benefits of exercise on the heart are well known. The heart accommodates and adapts to the demands we place on it in the same way our muscles adapt as we lift weights. Initially, there is some minor damage, and after recovery, the muscle rebuilds and repairs itself to be stronger and able to handle more stress. Some adaptations are normal and beneficial like the ones we already discussed. But others may be harmful and lead to sudden death, chronic abnormal heartbeats, or inability to pump blood adequately.

The amount of endurance training that leads to abnormal heart problems is still not completely known, but there does seem to be a sweet spot of about 20-30 minutes of moderate activity daily (ie a 15 minute/mile jog or walk, cycling at 15-20mph).?5? Triathletes, marathoners and other endurance athletes often train 5-10 times more than these beneficial durations. Below I list several different types of abnormal adaptations from an abundance of endurance exercise. These fall into three categories of issues related to muscle tissue, blood flow, and electrical conduction.

Problems with the Electrical Conducting System of the Heart

Two case series articles have been published that sought to gather and categorize deaths occurring in triathletes. One was published a few years ago and at that time was the most comprehensive article dealing with the topic.

In the US, all identifiable deaths during USA Triathlon races between the years 1985 and 2006 were analyzed. The overall risk was 1.74 per 100 000 (2.40 in men and 0.74 in women). The rate did not seem to differ based on the type of event. Most of these deaths occurred during the swim leg. At autopsy, nearly half had cardiac-related abnormalities such as narrowed arteries or an enlarged heart.?6?

In February of 2020, a similar case series was published in the UK that looked at triathlon related deaths between the years The overall risk of triathlon-related deaths in the UK was 0.5 per 100,000 participants. Of these half were thought to be due to pre-existing cardiac conditions.?7?

The risk of dying during a triathlon due to a heart-related condition is not zero but it’s fairly low. Nevertheless, age is a risk factor for developing heart disease. If you have not had a cardiac evaluation by your primary care doctor, please make an appointment as soon as possible. Screening tests may include an electrocardiogram (EKG or ECG), an echocardiogram or an exercise stress test. If you have anyone in your family that has ever had heart disease make sure your physician knows this as well, as it increases your own risk.

Silent heart disease in athletes has been the cause of death in two personal friends of mine, and a third friend was successfully resuscitated after a bicycle ride. All had been healthy & active their entire lives, and their endurance activities most likely prolonged their lifespan. So please don’t let the fact that you’ve been active stop you from getting a checkup and screening with your physician.

Thank you so much for reading this far. Next up in my “Tri over Fifty” series, I’ll discuss the muscle-related side effect of aging called sarcopenia, and again will discuss the benefits of triathlon training in combatting this monster. 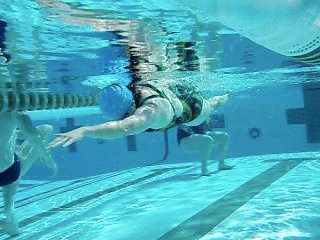 How Swimming Helps Your Balance

Yesterday this interesting article in the Washington post discussed a study linking a decreased risk of falling to the activity of swimming. Men over 70 who had fewer falls also swam more than their counterparts. While the study does not identify a causal link, I have a few ideas that I think are worth sharing. Swimming may help improve balance and neuromuscular response, for additional reasons that are not discussed in this article.

The horizontal orientation of swimming challenges the cerebellum & vestibular system in a different orientation than on land…without the risk of injury. Much like a baby learning to walk by falling, catching itself, trying again and again until it “learns” how to balance, a human body in the water is always falling towards gravity…without the impact.

Every time the body rotates or changes its orientation there is an up/down shifting of the body in the water due to gravity…much like the body is “falling”. But as soon as buoyancy equilibrium is found, the body returns to neutral buoyancy.

During these “falling” episodes, humans respond by kicking or flailing or sculling or lifting the head…they are in built reflexes. Overcoming those reflexes forces the vestibular system to deal with a new normal…an new sense of orientation.

Whether a swimmer realizes it or not, swim time is “play time” for the brain and new pathways are be established. Like a baby learning to walk.

A sense of “falling forward” when swimmers get to the positions that are better swimming positions, horizontally balanced head, shoulders & hips, is due to the vestibular system & cerebellum being used to a much more vertical orientation.

If this sounds like you, try this curious experiment. Lay flat on a bed and let your chin be off the edge so you are looking at the floor…do you experience any vertigo? And if you do so then look right and look left a bit…how does that feel? This is the position you should be in ideally in the water…body horizontal, head looking down & aligned cervical spine.

Could be interesting to play with!!