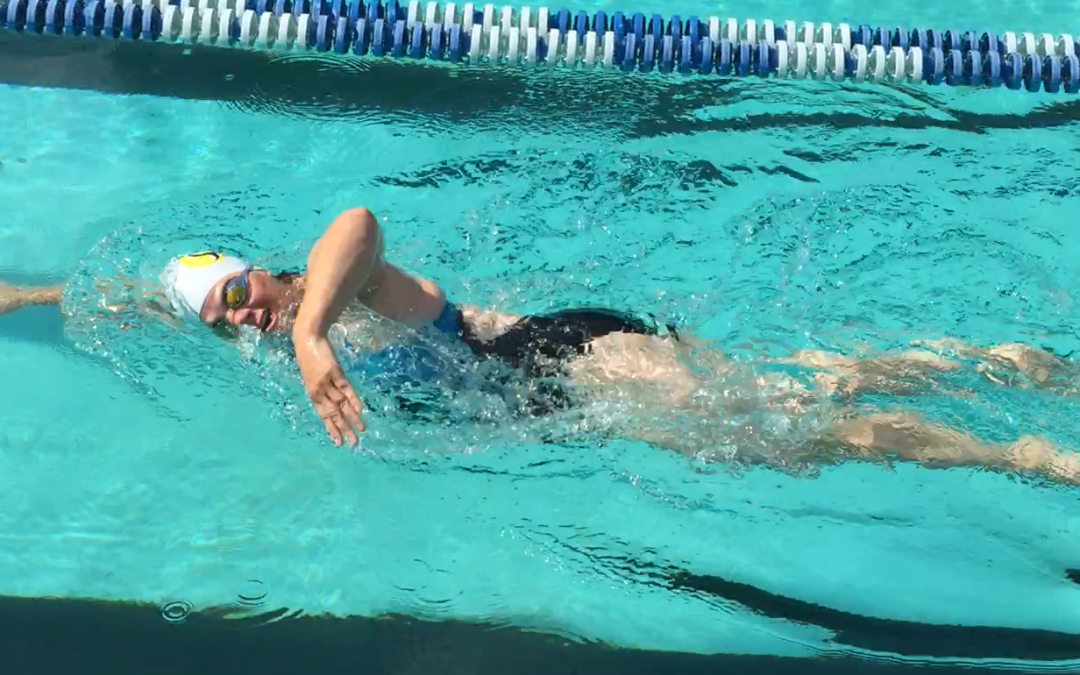 This tuneup is similar to the previous tuneup, but we are now focusing on obtaining your breath during the recovery portion of the stroke. This sequence differs in that the one armed swimming is done with the opposite arm as the skating drill that precedes it.

During the initial one-armed swim with no breathing, focus again on how the body tends to sink during the recovery, and return to the surface after the entry of the leading arm. To sense this it’s important to stroke deliberately yet gently, recovery smoothly and then re-enter and pause in skate. Once you become tuned into the instability caused by the recovery arm, we can actually use this timing to help time the breathing.

You may repeat this sequence as often as you like. Repeat on your “weak side” breathnig as well.

****Descriptions ****
Skating with sneaky breath: Body should be slightly rotated in skate position. Hips & Shoulders aligned. Lead arm is on it’s wide track. Sneaky breath: Pivot the head away from the lead arm to grab a bite of air while keeping lead arm on it’s track without moving under the body or pressing down.

One Armed Swim NB (No Breath): Do 4-6 one armed strokes without breathing first. Use the opposite arm as the leading arm from skating drill above. Note that this is the opposite of the previous breathing tuneup sequence. Focus on evenly rotating the hips & torso with each stroke while non-stroking arm remains at the side of the body. (ie when lead arm is out, that side of the hips and shoulders are rotated closer to the pool bottom. As the arm strokes, body rotation occurs and finshes with the opposite side hips & shoulders rotated near the bottom of the pool at the end of the stroke and during recovery. When the recovery arm reenters the water by spearing back to skate, the torso rotates back to original position. Pause a moment in skate to feel streamlining as well as letting the body return to the surface. Begin next stroke when you sense stability returning. **In this version, focus as well on how quickly the body begins to sink after finishing the stroke. Does it occur only after your arm exits the water? Before your arm exits the water? Does it change with the width and height of your recovery?

One Armed Swim with Breathing: Same as above, but now, let head swivel/rotate to grab a breath just as you did in the skating drill above. You are now combining it with the one armed stroking. Breath toward from the stroking arm as it begins it’s recovery. You’ll hopefully find that there is a clear, early window in which to grab air effortlessly as long as you don’t wait too long. During the recovery, the body begins to sink, and if the breathing occurs too late, you’ll be forced to lift the head and use an early downward push on the water to find air. Instead, the neck should remain relaxed and the head floating on the water as you look towards the recovery arm, and even observe the recovery forearm pass in front of your face while the elbow leads the recovery. , 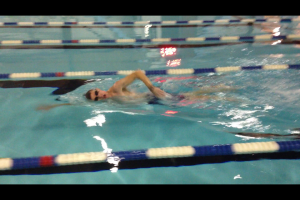 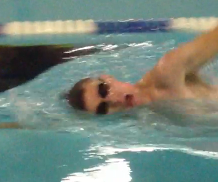