Want to Swim Like an Olympian? Then Avoid the “Crossover Effect” 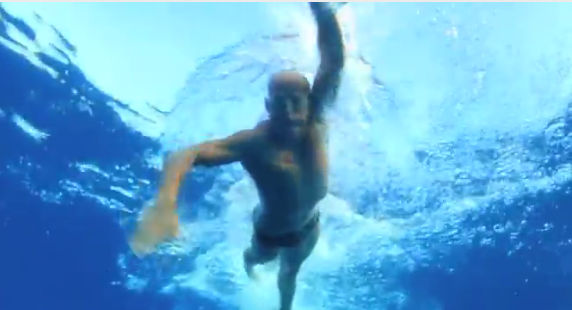 You can learn something from 100m sprinter Simone Manuel or distance specialist Katie Ledecky, regardless of which one of these remarkable women is your hero.

Streamlining and drag reduction in the water helps us conserve forward momentum because water is 800 times denser than air.  Anything you can do at any point in the stroke to become more streamlined, even as you’re trying to swim faster, will allow you to swim better, with less energy. Why? because slowing down is what humans do best in the water!   Staying fast means paying attention to small details…for example, the “crossover effect”.

The Crossover Effect is Human

The Crossover effect occurs because of the way our shoulder joint is oriented, and the fact that we are used to operating in our daily lives with our arms reaching, holding, and manipulating objects directly in front of us.   When we turn our upper body, we are usually still operating in the frontal plane, or the plane that divides your body into a front half and a back half.  the shoulders lift the arms forward and typically our arms stay in front of us most of the time.

Picture things like typing, driving, cooking, cycling, having a conversation with someone (arms folded or hands in front pockets) as typical things we do.  We carry this habituated position of the arms into swimming and as a result, while you don’t feel like you’re crossing your arms in front of you, the effect is that arms cross midline of your direction of travel.
This is a key point, and the reason it’s so difficult to correct…your arms are still in front of you when you crossover in swimming.  The crossover effect is that you direct your energy diagonally instead of the direction you really want to go!  How frustrating, right? Believe me, I know.   But sometimes you don’t know you’re doing it until you see a video or photo of yourself, or have someone physically make that correction for you.

Olympians Eliminating the Crossover Effect (this is the slick arm trick)

Here are two examples from the 2016 Olympics, Katie Ledecky in the first photo, and Simone Manuel in the 2nd photo.

Their arms are extended parallel to the lane rope, right? The arm is aligned, no crossover.  The effect of arm aligned, is that momentum continues forward.   However look at where their sternums are directed, and look at their body rotation.

Now imagine those activities I mentioned previously…driving, typing, shaking someone’s hand.  If Simone Manuel were autographing a gold medal photograph at this moment instead of swimming, her left arm would be pointed way over towards the right edge of the photo in a diagonal direction, right?

How does she do that?

When the body is actively rotating in freestyle (or backstroke), the lead arm aligned requires you to have the sensation that your arm is kind of off to the side a bit, even sticking out.  Visualize yourself in their rotated positions in the pool…now hold your arm above your head and visualize where the surface of the water and where the lane rope would be.  Can you get your arm lined up with the lane rope? It will feel far off to the side.

Avoiding the crossover effect is one easy trick you can practice while standing in the mirror so that you start to develop your Olympian’s freestyle stroke!

In the meantime, don’t try to sign any autographs while swimming, things will get messy and you’ll avoid the crossover effect!

This dryland Swim checklist will help your freestyle! It has nine different swimming checkpoints that you can practice on the deck or at home to help you improve your body position, streamlining, shoulder comfort and recovery.