Your 12 Week Training Plans for Sprint and Olympic Races 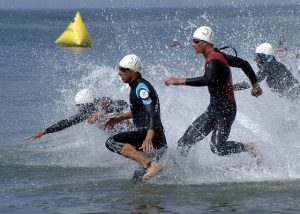 Image by David Mark from Pixabay

Here you can find week-by-week links to your training for both types of triathlons.  These annotated weekly links include training recommendations for both “First time Finisher” or Novice triathletes as well as Intermediate triathletes with a few races under their belts.

Many of our readers are interested in more detailed training plans for even faster triathlon times.  If that’s you, we’ve got you covered!  You can check out our detailed Intermediate and Advanced Triathlon Training Plans here.

About these 12 Week Triathlon Training Plans

Beginner triathlon training plans are for the first time participant whether Sprint or Olympic. Your goal is to cross the finish line and have fun while doing it. You may not have a lot of experience in endurance training, and that’s OK. All training is listed as time based only, done at a “conversational” effort, or an effort level at which you could easily carry on a conversation. You can use a heart rate monitor if you have one, but you don’t have to.

Intermediate triathlon training plans are for those who have previously completed at least one, and up to a season or two of previous triathlons of either sprint or Olympic distance. They are familiar with training by perceived exertion and ready to consider training by heart rate on both the bike & the run. They have built a solid history of regular training at least 3-4 times per week over the last 3- 6 months and are ready to add increased intensity to their plan.

Run training for the first time finisher is focused on building up to a 5k run without injury, getting used to the feeling of transitioning from bike to run, and making sure that on race day you have the stamina to finish the run at your own pace, following the swim and the bike. Run training for the intermediate triathlete includes higher intensity training, testing, hills, fartleks and various types of track work, as well as several types of bricks & transitions.

Bike training for the first time finisher is focused on getting you comfortable on your bike, helping you learn how to spin the pedals efficiently so that all your effort goes into moving the bike forward, and developing just a little bit of courage in pushing yourself to your comfort level on race day. Bike training for the intermediate triathlete includes higher intensity training, testing, hill work, and several types of bricks & transitions.

Swim training for the first time finisher is focused on getting you comfortable in the water, feeling balanced and supported, and establishing an expectation of improvement every time you get into the water to practice. Swim training for the intermediate athlete is focused on improving efficiency, increasing speed and ensuring that technique and speed increases occur in parallel. In both cases, learning new ways to approach swimming…shifting from a “Workout” mindset to a “Practice” mindset, will speed improvement dramatically and help you learn to enjoy swimming. Please read the introduction here for additional ideas about becoming a better swimmer.

Priorities for your Training

Our priorities are making sure that YOU are enjoying your training, improving your technique, learning more about the great sport of triathlon, improving overall fitness and learning how to incorporate triathlon training into a healthy lifestyle.

Get started with your training today…just hop into the program for the current week as long as it looks like you can do the assigned durations for the week. Don’t try to “make up” for any lost time, but if you need to start at shorter distances or times listed, then start with the first week that looks reasonable, and each week gradually add on a little more time until you are caught up.